AHRC CONDEMNS THE RELIGIOUS PERSECUTION OF CHRISTIANS IN IRAQ 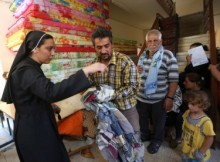 The American Human Rights Council (AHRC) condemns all human rights abuses. AHRC is especially alarmed at the increase of persecution on the basis of religion sect in Iraq.  AHRC strongly condemns abuses against the Iraqi Christian community.  AHRC is deeply troubled with reports of expulsion of Christians from the city of Mosul, the destruction of churches and the looting of businesses. AHRC joins the Chaldean Patriarch Louis Sako and Pope Francis’ appeal to the international community to help end this persecution.  The United Nations must uphold the  Universal Declaration of Human Rights and intervene to end the humanitarian crisis in Iraq.