AHRC condemns the mass shooting at the Pittsburgh Tree of Life synagogue in Pittsburgh: 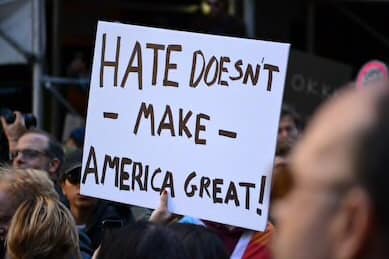 This heinous attack is another painful reminder of the threat of mass violence. AHRC reaffirms that acts of hate, violence and/or domestic terror are never justified and the responsibility is squarely that of the perpetrator or perpetrators. However, we do believe that hateful and divisive rhetoric does have consequences. The toxic political environment of this country is a result, in big part, of the heated rhetoric from the top. Those at the top set the tone for the country. We urge, in the name of peace, that our leaders be careful with their words and understand the responsibility they hold.
AHRC-USA expresses its sincere condolences to all families of the victims for the loss of their loved ones and wishes all the injured a speedy recovery.
AHRC salutes the law enforcement agencies, state and federal, especially the first responders, for the swift action that helped save lives as well as for arresting the attacker.
We realize that no society can be free from violence. The US is a country of more than three hundred million people. We are bound to experience violence. However, we can work together to combat hate and divisiveness and reduce violence. We are either part of the solution or part of the problem. Hate, violence and terrorism recognizes no religion, no race and no borders.
“It is completely natural to have political disagreements due to different values and priorities,” said Imad Hamad, AHRC Executive Director. “However, it is not necessary and not acceptable to divide people and demonize those who disagree with us,” added Hamad. “Today eleven Jewish Americans, our brothers and sister in citizenship and humanity, lost their lives in a senseless act of violence, it is time to restore civility to our political life,” concluded Hamad.