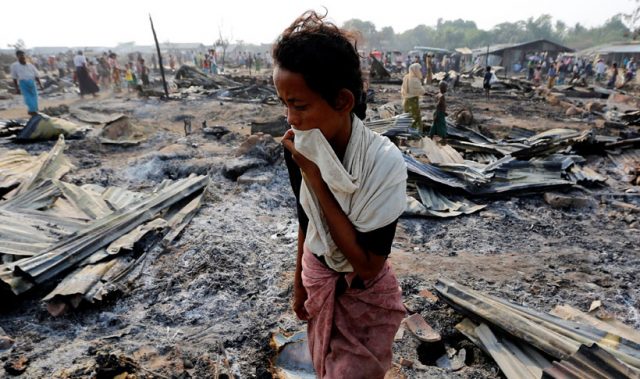 Several media sources indicate that women were subject to rape and death while their homes were burnt and entire villages were destroyed.  Thousands of innocent helpless civilians were displaced and trapped in forests and mountains desperate for safety. The whole world has seen the horrifying pictures of desperate Muslims trying to escape the slaughter.

AHRC is appalled by the world’s failure to pressure Myanma’s government to adhere to international law and to heed the United Nations call to end these ongoing killing.  The Myanmar government continues to block any humanitarian aid to the thousands of helpless people.

AHRC is also deeply troubled by Aung San Suu Kyi’s  silence in the face of massacres and slaughter. Her silence in the face of the slaughter has surprised millions of people who supported her and admired her in her struggle for democracy in Myanmar. Unless Aung condemns the violence and uses her position to end it, we call for revoking her Noble peace prize.

“Again we see the world not doing nearly enough to stop the massacre of innocent people,” said Imad Hamad, AHRC Executive Director. ‘We call on the UN and all world powers to intervene in Myanmar and save the Rohingya from the ongoing ethnic cleansing,”  urged Hamad.