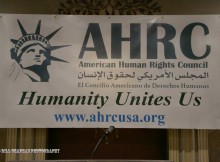 [Michigan, December 8, 2014]: In a great spirit of determination to advance the cause of  human rights, the American Human Rights Council  (AHRC) held its first Meet and Greet on Thursday, December 4, 2014 in Dearborn in the presence of overwhelming participation of over 400 distinguished guests.  Elected officials, government agencies, dignitaries, diplomats, community organizations, media, judges, key officials from police departments and leaders among other distinguished guests  joined the AHRC  celebrating its launch after a year of hard work, planning, advocating, addressing issues and being a vocal voice on behalf of human rights in America and abroad.  The reception’s emphasis was on the cause of human rights expressing unwavering commitment to advance the cause.   ” Humanity Unite Us”  was the pulse and the spirit of the gathering where the guest speakers embraced the slogan and expressed commitment to advance it.  AHRC highlighted its mission and vision and provided a summary of its active involvement throughout the past year, beginning with the E-News alerts, conducting field visits to Michigan prisoners, promoting the Prisoner and Family Gift initiative during the month of Ramadan and the Holiday Season and more.

Prominent Michigan Atty. Shereef Akeel, the AHRC Advisory Board Chairman who emceed the event welcomed the guests stressing on the importance of the AHRC and its unique role and mission calling for collective community work to advance this common cause. He stressed on the importance of addressing the prison population challenge as a growing challenge where prisoners are often forgotten. “The goal is to bring attention to an unforgotten segment of our society where human rights violations occur on a daily basis in our prison system and deportation centers. The diverse make up of this historic event reflects the spirit and universal appeal of the American Human Rights Council” said Attorney Akeel.

Ms. Yasmeen Suri, a professional Artist & Singer performed the American National anthem. Several distinguished speakers addressed AHRC commending its birth and saluting its unique mission within the community. Mayor J. O’Reilly of the city of Dearborn delivered brief remarks welcoming all to the city and saluting the AHRC as one additional important community voice on behalf of the cause of human rights.

Ms. Sara Malak, AHRC Student intern noted the production of the AHRC Prisoner & Loved Ones guide a resource to prisoners and their perspective families. She highlighted her internship experience with the AHRC expressing appreciation to Ms. Minnie Washington, AHRC Internship Program Supervisor and Mr. Hamad.

H.E. Ambassador Dr. Clovis Maksoud, AHRC-Honorary Chair noted in letter that the inaugural meeting of AHRC’s constitutes an opportunity to widen the framework of commitment to human rights and hopefully human security. He stated: “It is my privilege to salute you all and wish AHRC to heal many wounds that still prevail as witnessed in Ferguson Missouri and be a dynamic component of the human and civil rights movement in the US.”

Dr. Husain Salih, AHRC Vice President extended his gratitude to the guests coming in support for the AHRC and its mission. He extended sincere apology for the absence of both, Imam Mohammad Mardini former AHRC Interim president and Dr. Opada Alzohaili, the current AHRC President for not being able to join the reception as planned due to exceptional unforeseen circumstances. Dr. Salih expressed the gratitude of the entire AHRC family to Imam Mardini for his leadership helping to bring the AHRC to light.  Dr. Salih announced Mr. Imad Hamad officially as the AHRC Executive Director.  Mr. Hamad expressed his gratitude to the AHRC team and thanked all of them for the warm support stressing on the future ahead and the challenges  that we are facing including the prisoners’ rights and their well being. “No prisoner left behind” was the core of the remarks he made. Hamad extended the AHRC hands to work with all other organizations to advance our common future.