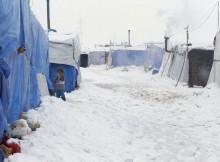 [Michigan, January 12, 2015]; The American Human rights Council (AHRC) calls upon the international community and the people of good will in the United states as well as the world to lend an immediate aid to the Syrian refugees as well as all other refugees who have been displaced from their own native home countries due to war and conflict amidst the bad weather conditions that hit several areas including Lebanon, Jordan and turkey where Syrian refugees temporally forced to settle.

The freezing weather and the winter storms have destroyed their only place of living in tents where these camps and areas lack the basic requirement of living. Elderly, women and especially children are the ultimate victims adding to their existing suffering and misery. Several U.S. charity organizations including Life for Relief & Development, American Near East Refugee Aid (ANERA), and Syrian American Medical society have jumped to help and rescue. The need is dire and those helpless and hopeless refuges are in great need for a lending hand as they cope with the hardest weather conditions in addition to the impact of the ongoing unfortunate conflict in Syria. The same applies for Palestrina refugees especially in refugee camps in Gaza, as Gaza continue to try to recuperate from the last Israeli assault and the massive destruction it inflicted on the people and infrastructure few months ago. The misery goes in Iraq as refugees there who fled the sectarian conflict seeking safe-haven, are facing the same plight. It’s a true human tragedy that the world is witnessing.

AHRC joins the people of good will in America as well as the world to accelerate and expedite the efforts to provide the much needed help to the refugee populations and the children who are being deprived the basic human needs. For more information and to help, visit these organizations sites: