AHRC calls for aid to Syrian refugees in the United States: 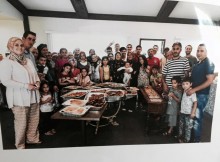 The American Human Rights Council (AHRC-USA) calls upon people of goodwill to lend a helping hand to the newly- arriving Syrian refugees in Michigan as well as to those who have been placed in other states. Millions of Syrian civilians have been displaced with many ending up as refugees all over the world. According to the United Nations, the Syrian crisis is one of the most pressing humanitarian crises facing the world. The Wall Street Journal has reported that “Syrians are prioritized [as refugees over other refugees] because the United Nations High Commissioner for Refugees has advised governments that they are so-called prima facie refugees, meaning they should be granted instant humanitarian protection because they are fleeing a war zone.”

A group of Syrian Americans in Michigan and others have launched an effort to help these newly- arriving refugee families with their basic living needs. They have created a Facebook page calling for donors to provide any possible help. They have acquired a warehouse to collect house furniture, appliances, clothes for all ages, kitchenware, bikes, electronics, TVs, furniture, bed sets and bed sheets. Old clothes or old mattresses and big appliances are not being collected.

The group urges donors to donate items that are in good condition and are functional. The group welcomes volunteers to help in this noble mission. Those interested in donating to this project can contact the group through their Facebook page:

The warehouse is located at 3425 Starr Rd., Royal oak, Michigan.

“We urge all people of goodwill to help the newly arriving Syrian refugees, our brothers and sisters in humanity, “said Imad Hamad, AHRC executive director.