AHRC APPLAUDS PRESIDENT OBAMA FOR TAKING ACTION TO FUND BODY CAMERAS IN DETROIT, DEARBORN AND ACROSS THE NATION 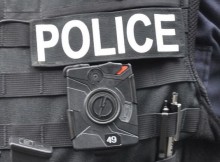 The United States Department of Justice has announced 73 law enforcement agencies across the country will receive $20 million in federal grants to help them purchase and implement the use of body cameras.    Detroit and Dearborn were two of the cities to receive body camera grants.

The program was announced in May by President Barack Obama after a series of police shootings across the U.S. The pilot program awarded more than $19.3 million in grants to police departments nationwide and will provide training on body camera use, according to the Justice Department.

“This vital pilot program is designed to assist local jurisdictions that are interested in exploring and expanding the use of body-worn cameras in order to enhance transparency, accountability and credibility,” U.S. Attorney General Loretta Lynch said in a release.

“We are grateful to President Barack Obama and  the U.S. Department of Justice for responding to calls from the AHRC, State Rep. Rose Mary C. Robinson and community activists across Michigan and the nation for increased support and funding for the deployment of this technology,” said Imad Hamad, Executive Director

“As we work together to build trust and strengthen community relationships with law enforcement, funding body camera programs will have a positive impact.   There is more work to do but this grant program is a step in the right direction.  These devices will help protect our human freedom and individual liberties.”

AHRC members Elisa Grubbs and Attorney Isaac Robinson have organized meetings across Michigan calling for body cameras to be a budget priority.

“These grants for Dearborn, Detroit,  Chicago, Los Angeles and San Antonio are a win-win for law enforcement and citizens,” said Elisa Grubbs, a Detroit activist and member of the ARHC.   “President Obama’s response represents a victory for our grassroots organizing efforts. ”